As architects for The Onyx on Cape Town’s Foreshore and the iconic Tuynhuys apartments opposite the Cape High Court, Robert Silke & Partners is known for sculpturally curvaceous buildings that transcend the ascetic functionalism of the developer norm. T​heFlamingo’s ​name is a quirky and deliberate reference to the upbeat tropical modernism that marries serious European design of the twenties and thirties, with the flamboyant luxury of the great coastal resort cities of Miami, Rio & Honolulu. The Flamingo​ is playfully and frivolously sculpted, like Bauhaus on heat.

The site chosen by Signatura is wide and shallow, offering full-frontage to virtually all of the apartments in the building. 55 out of the 71 apartments face the front, all of which command dramatic views across Fresnaye, all the way up the slopes of Signal Hill and culminating in Lion’s Head – Cape Town’s very own Sugarloaf Mountain. The first-floor apartments share the same panoramic views as the eighth-floor apartments.

The front-facing units are all cleverly cranked at a 45 degree angle to maximise the world-class views across Fresnaye, whilst most of the 16 sea-facing units actually have frontal views towards the Atlantic Ocean. Few understand that mountain views in the Atlantic Seaboard require tall windows to maximise blue sky and sunlight above the mountain silhouettes. As such, ​The Flamingo’s s​liding doors generously stretch all the way from floor-to-ceiling to maximise mountain views, whilst balconies are architecturally staggered away from the next apartment to effectively separate and maximise personal privacy – framing the views at the same time.

It is this level of detail that has been considered in all aspects of the unique design. The typical studios are intricately designed and detailed to maximise space and delight – whilst all one-bedroomed units are corner units, each with their own individual design quirks and idiosyncrasies. Some units have super-sized circular porthole windows framing Lion’s Head, whilst other windows have frameless corners facing the sea. The design style is modern, sculptural and optimistic. Futuristic even.

Futurism succeeded the Art Deco style in Europe and the USA, but never made it to South Africa where it was sadly eclipsed by austere and ascetic architectural Modernism, which (largely due to cheapness of construction) became the dominant force in generic blocks of flats across the country. Futurism was, in contrast to Modernism, sculptural and decorative, playful and optimistic. First pioneered in Italy by Filippo Marinetti, Futurism was kept alive in the 1960’s by John Lautner’s flying saucer houses in California, and is today best represented in the work of Zaha Hadid Architects.

Futurism is synonymous with bespoke, premium properties in forward-thinking global centres. In pursuit of an aesthetic system in which to frame a new, state-of-the-art apartment building, the Futurist architectural aesthetic was the perfect fit for The ​Flamingo.​

Gleaming solid white floors (tilted at a quirky 45° angle) are a sophisticated and understated design feature that melds seamlessly into the warm white walls and matte white joinery with elegant black metal handles, edgings and trims – cleverly bouncing the ample natural light around the rooms. The bright white floors extend right into the bathrooms, where traditional “Johnsons White” small-format wall-tiles evoke the clean and sophisticated metropolitan apartments of upscale Berlin or Tokyo.

As a remarkable and unprecedented standard feature, T​he Flamingo’s k​itchens offer the subtle ostentation of solid Sardo granite countertops that seamlessly fold-up and wrap into matching granite splashbacks. And all of this sophisticated monochromatic restraint is joyfully juxtaposed against a pastel flamingo pink feature wall – simply because we can!

Public Areas are well-finished and compact, with solid stone floors in all lift lobbies, as well as the main entrance lobby. What’s more is there’s a dramatic and generous rooftop sundowner view terrace for the use and enjoyment of all residents. 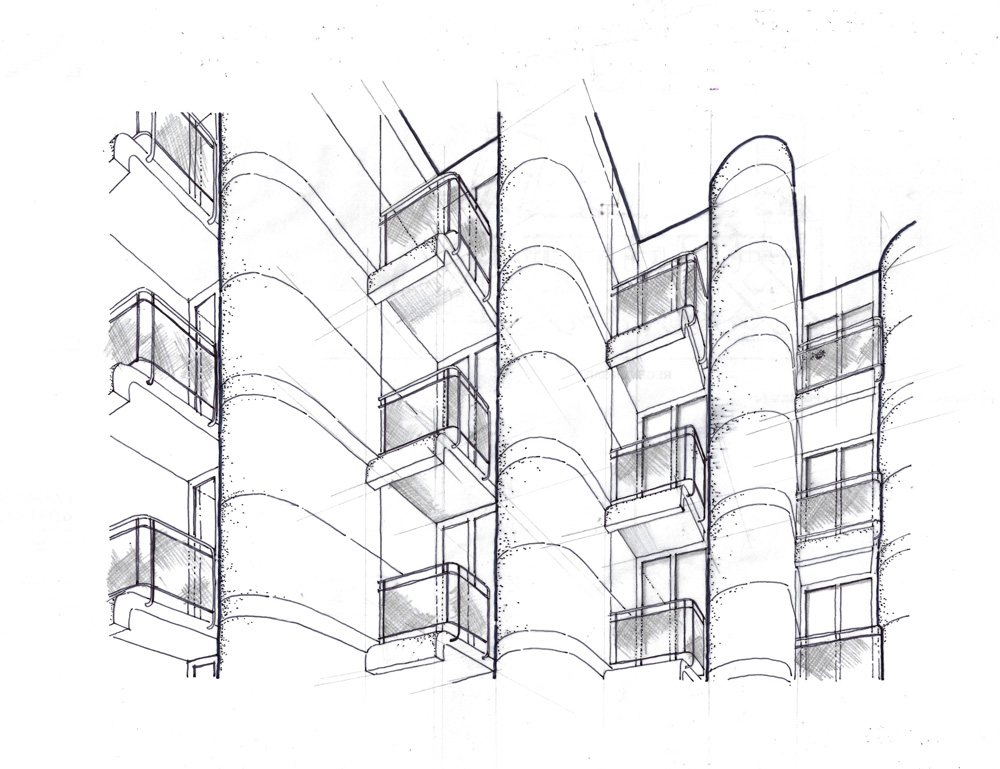